Many shooters have their rifles’ scopes mounted by their gunsmith or the manufacturer, others simply start using the gun in the manner in which it came. However, even if it is properly placed on the gun, the scope might not be customized for you. Using a rifle scope without properly fitting it for you would be like purchasing a car and then driving it without adjusting the mirrors or the seats from the factory positions. Therefore in this guide, we will discuss how to mount a long range scope on a scout rifle. First let’s get you up to speed on what a scout rifle is.

How the Scout Rifle Development was Impacted by Lt. Col. Jeff Cooper

In the early 1980s, Colonel Jeff Cooper, a United States Marine and specialist on the use and history of small weapons, established and advocated the scout rifle concept as a class of general-purpose rifles. Instead of focusing on firepower, this rifle was designed to be easily portable and accurate.

The first commercially produced Steyr scout rifle was created in 1997 by Steyr Arms (then Steyr Mannlicher AG), fulfilling Col Jeff Cooper’s aim of creating a “short, light, portable, multipurpose, utility weapon” after considerable deliberation about the ideal firearm. Lt. Col Jeff Cooper was involved throughout the whole engineering, design, and production process. He was renowned for owning one, which is regarded as a noteworthy accomplishment in the long arms community.

A rifle scope that is attached to a rifle’s barrel and placed in front of the receiver is called a scout scope. It is a forward mounted scope. In addition to having a lot of eye relief, scout scopes frequently have low magnification and are very lightweight. The purpose of scout scopes is to allow shooters to fire while keeping both eyes open and recover from recoil more rapidly for quick, subsequent rounds.

Eye relief is a key consideration before even thinking about a rifle scope. Eye relief is just the space between your eye and the eyepiece lens while you are positioned behind an optic. According to Accurate Ordnance, you can check and determine the eye relief for you.

You will notice black rings in your sight image or a dim, blurry view if you are too far to your rifle scope or outside of its specified eye relief. On the other hand, in addition to a poor image, being too near increases the likelihood that your scope will strike you in the face with the recoil of your weapon.

But when you’re adequately distanced and inside the right eye relief for your optic you will receive a brilliant, crisp sight picture.

Pros and Cons of a Long Eye Relief for Scout Scopes

The primary disadvantage of extended eye relief scopes is their physical limitations: building a long eye relief scope with a high magnification range is essentially impossible. Consequently, less light will be able to reach your eye as the magnification power increases, making the image darker.

These scopes are ideal for hunters and shooters who like enclosed, steep, or hilly terrain. High magnification is actually worthless under these circumstances, since shooting uphill causes eye relief to become shorter.

The Vortex Crossfire II optic is an illustration of a cost-effective long eye relief scope. Although the Vortex Crossfire II falls short of expensive optics like the Leupold VX Freedom scout or the Nikon Monarch, it may still be used for range competitive shooting and hunting without breaking the bank.

In this segment of this piece, we will talk about what makes a great scout rifle scope. They are as follows:

One of the most crucial elements to take into account is magnification, which is influenced by the type of shooter you are. Given that scout rifles are medium range rifles, many of their scout scopes have a lower magnification power, but if you want to shoot targets at a distance of more than 350 yards, you’ll need a higher magnification.

You must take durability into account when choosing a scout scope. Get multi-coated lenses that can withstand abuse, including continuous high recoil and unintentional drops. Additionally, look for scout scopes that are nitrogen gas-purged and O-ring sealed; this will make them waterproof and fog-proof.

You should now fully understand what the term means given that we’ve already talked about eye relief. Since scout scopes are mounted before the receiver, it is preferable to pair them with a substantial degree of eye relief. A long eye relief also helps the “scout” shoot while keeping both of his or her eyes open, thereby retaining peripheral vision and situational awareness.

The optimum scope needs to be portable. Your rifle’s performance can readily be changed by a heavyweight forward-mounted scope, which also makes shot alignment more challenging. Including the sling and optic, Lt. Col. Jeff Cooper specified that the ideal scout rifle should not weigh greater than seven pounds (3.1kg).

Your objective lens’s diameter should be as large as possible. This will increase the amount of light entering the sight and facilitate easier target acquisition. It is beneficial to have an illuminated reticle, especially in low light conditions.

Now that we know what kind of scope we should use for our scout rifle, a final question that plagues the minds of shooters is, “Should I use a conventional scope or red dot scopes.”

A red dot sight offers higher precision than a standard scope for short-to-medium range shooting (out to 75 yards or so). At such close ranges, they are very precise and unrivaled in terms of target acquisition speed. In contrast, they frequently don’t offer any magnification, which is preferable if you use them correctly by aiming with both eyes open. Additionally, as the range increases, the red dot gets bigger in relation to the target.

On the other hand, the conventional scope is ideal for medium- to long-range combat (or target practice). Additionally, they provide illumination and magnification, making aiming simpler. For hunting in open areas like the plains, a regular scope is ideal.

How to Mount Your Scope on Your Scout Rifle

Step 1: Make Sure That the Firearm is Unloaded

The first step is to practice firearm safety: unload the rifle. Also, check the chamber and confirm that there is no magazine inside it. It’s not enough to treat a firearm as if it is loaded, Colonel Jeff Cooper approaches firearm safety radically: a firearm is loaded.

Step 2: Mount the Rings in Place

Before proceeding to place your optic, you should first firmly place your scope ring on your scout rifle before mounting your sight. By securing it firmly to the body of your rifle, make sure to remove any slack. This is crucial because you do not want your firearm’s rings to come off after a recoil.

Step 3: Place the Scope on the Ring

You can then proceed to mount your scope on the rings after they have been securely attached to your rifle. Take your scope and set them in the lower half of the scope ring. Without the top of the rings on, you can operate with and adjust the scope. But if you’re worried that it’ll slip off while you’re adjusting it, you may retain it securely by loosely fastening the rings’ tops. In this manner, you are able to make modifications without being concerned about potentially ruining your pricey scope if it falls off.

In this stage, you should measure the scope’s height and distance from your face. There is obviously a limit to how low we can get the scope, so we would be tweaking in and out, up and down the scope mount. But keep in mind that you want the scope to be placed as low as possible.

You’d have to check your scope after adjusting. To do this, place your head on the rifle’s cheek rest with your eyes closed. Just let your head fall against the cheek rest before lifting and opening your eyes. If your eye is not level with your scope, you should adjust the stock rather than your head position, presuming that your scope base has been lowered to its lowest setting. Remember to test your scope in whatever your predominant firing position would be (standing, sitting or in the prone position).

When your scope is as low as the rings will allow it to go but your eye-level is still lower than your scope, you should build up your stock so that your head can be raised and your eyes are level with your scope. To achieve this, you may either purchase an adjustable stock or simply build your stock up by adding some wood chips and a cheek rest on top.

Make sure that your action can clear readily after each shot, regardless of what you build up on your stock.

Once you’ve corrected any height-related issues with your scope, move it forward and backward until there is no longer a shadow cast by the scope. It would be best if you could tweak it with the assistance of a friend.

The market is flooded with tools for leveling scopes. As an alternative, level your rifle first before setting your scope on top of it. This is critical because a rifle with a crooked stock renders a leveled sight unusable.

Last but not least, get a wrench and tighten your scope. To avoid it from coming off following a recoil, keep in mind to attach it securely and as tightly as you can.

Although they may not always be the shooter’s first choice for every shooting and hunting situation, scout scopes nonetheless have a lot of benefits in some circumstances.

Selecting the ideal scout scope for your scout rifle is a highly individual choice. We hope that this post has clarified scout scopes and shown you how to put one on your rifle for maximum effectiveness. Whether for competitive shooting, target practice or hunting, selecting and mounting the ideal scope is critical to shooting success.

How To Choose a Good Scope for .308 Rifle 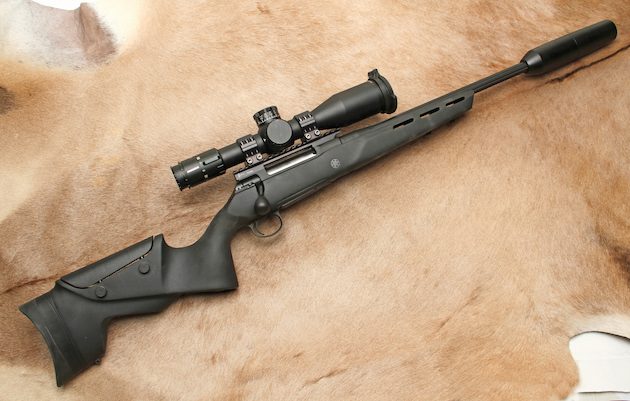 How To Choose a Good Scope for .308 Rifle